Already back in 1809 the German mathematician Carl Friedrich Gauss defined an equation, which is an essential basis for stochastics. What does this have to do with leadership? Well, a lot in working with people is about distributions: Talent, intelligence, performance, willingness to change. It’s good to understand the mechanics behind it.

The formula itself is still somewhat cryptic if you don’t work with mathematics every day:

µ is the mean and σ is the standard deviation. Some people may still remember the 10 D-Mark note. It was always useful as a cheat sheet in the math exam. The equation was illustrated there. Who was in bad terms with mathematics in school or at university might groan at this point and feel the urge to run away. Just a little more patience and we’re done it within seconds.

The Gaussian normal distribution is also called the bell curve. This is due to the shape that is obtained by plotting the probabilities over a population: 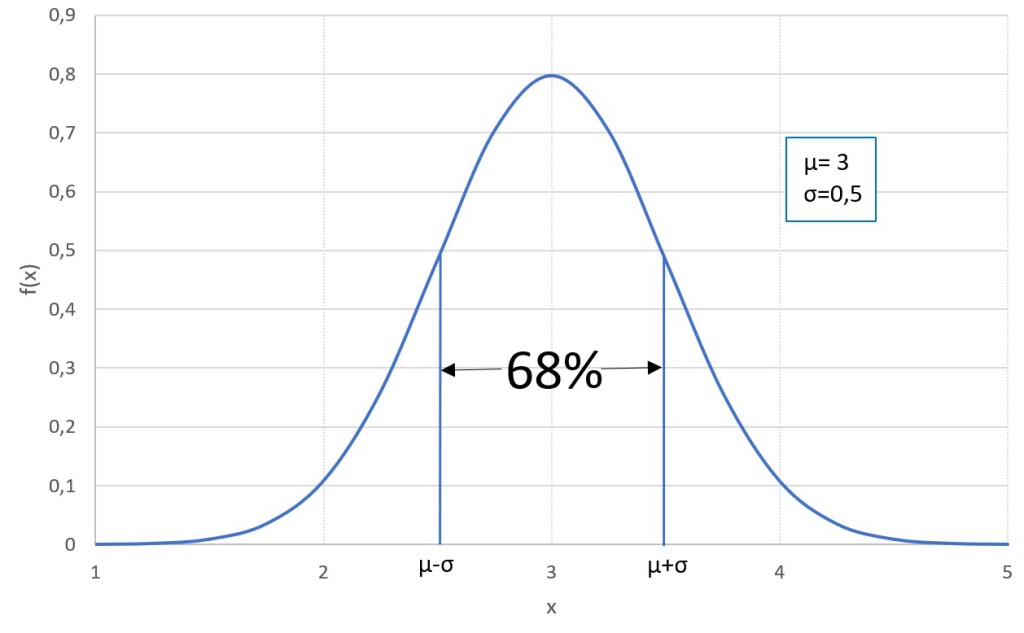 As we see in the curve, 68% are in the so-called 1σ interval. So much for the grey theory. Thanks for staying with me until here. What would a Mathematics Repetitorium be without its practical application?

As I already described at the beginning, such stochastic distributions are highly relevant in daily life. If you just take a sufficiently large number of measuring points, you will notice that many aspects of life follow such a distribution. Statisticians use it to investigate populations and determine, for example, the expectation.

In consulting companies, the distribution of the annual bonus is managed via such curves. In the annual performance assessment process, the individual assessments are compiled and plotted on an axis. The assessments range from Significantly overfulfilled our expectation to Not fulfilled our expectation. In the middle you find in management language Meeting our (high) expectations or in good Viennese simply it’s ok. There are guidelines for the distributions, but it is not atypical that 60-70% of the workforce ends up in this middle range.

Of course, the first distributions are still slightly shifted upwards during the initial compilation – after all, managers don’t like to give negative feedback and their crew is always a hand-picked elite. There are lengthy meeting rounds to compare individual performance and then calibrate overall distribution.

Now performance assessments are always important control levers for the manager. There will be some eager beaver who will always fight for the top scores and a few stragglers in need of a wake-up call. These two groups usually attract the most attention from the managers: the top performers are invited on stage and the stragglers get a personal motivation talk. The mountain in the middle is often ignored during the aftercare.

However, the mass in the middle defines the overall performance. They will take a very close look at what happens to the two outliers. Are the awards for the top performers so interesting that the effort is worthwhile or are the sanctions for the stragglers so lax that in the end, they had done better in terms of effort-benefit optimization? So, where is the mass heading?

I give another example: Willingness to change. If you plot the willingness to change on the x-axis, you can again divide it into three groups in a first simple iteration: The early adopters, the laggards and the sluggish mass in the middle.

The early adopters will always jump to something new immediately. They are intrinsically motivated and volunteer for co-creation and testing. You can work with them from day one. Then there are both nostalgics and saboteurs among the laggards. Some are still proud of the battery capacity of their Nokia in Smartphone times; others obstruct actively the change just by principle. Again, the sluggish mass looks to the left and right.

Now it’s up to the leader again: Can you promote the advantages together with the early adopters to move the sluggish mass, or will the laggards kill the innovation? As usual, you can influence the process by subsidies and sanctions.

An executive does well to be aware of this mechanism. All three groups need special treatment. Despite all the joy about top-performers and early adopters, you have to be aware that you can only make a lasting difference when the large mountain begins to move.

Do you know such distributions from your daily work?

Have you ever taken part in performance assessments that have been calibrated?

How much attention do you pay to the sluggish mass?